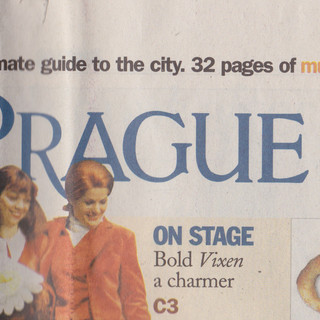 The fashion show by Yemi A.D., center, and his crew was short but slick.

The party begins to break up and the guests file out — except for a small group just getting going on the dance floor. A single mannequin wearing a black tank top and panty set signals that the store is open and ready for business.

A clever idea, to be sure, though of dubious commercial viability. On the other hand, with the way that trends catch on here — and the warmer months coming — it might not be long before it's chic to wander Vinohrady at 4 a.m. wearing nothing but a pair of Virgin Mary underpants.

Salačová, who says that DJing is just a fun hobby while she attends journalism classes, is wearing a provocative black see- through top, also from the collection. She doesn’t hesitate when asked if she would continue to wear Vive Maria clothes.
“Definitely,” she says.

Yemi is similarly enthusiastic. While his taste doesn’t run to the more risqué items, he is drawn to the daring and bold nature of the clothes. He likes that they are unique and have a fun.

Late-night fashions get down to basics ask a model, also one of the club’s waitresses.

She claims not to be on any particular diet. But she does eat right, she says, adding that the worst part about that is the vegetables.

The beautiful people
In the cavernous and seemingly endless club space, a DJ booth is situated prominently under a large, gold-framed painting of the Madonna (the religious one). Working the turntables is a rotating lineup of jockeys, including Teddy B, a veteran of the Ibiza circuit; and Michaela Salačová, Miss Czech Republic 2000.

Salačová looks at home DJing, a skill she picked up from Tebby B and others at Naif, an Old Town club where she still spins discs occasionally-

Clearly, Salačová hasn’t lost a bit of her beauty-queen training. When the cameras are on her, she poses and smiles, almost instinctively playing coy. Mere mortals might feel uncomfortable in the flurry of cameras and flashes, but Salačová stares directly into each lens, almost daring it to take another picture.

The crowd on the floor runs the gamut from the impeccably coifed and dressed to apathetic slackers.

A woman in her mid-20s, improbably tanned and disarmingly attractive, strikes an appropriately aloof and disaffected pose, as if she were the main attraction. Her straight, jet-black, shoulder-length hair spills onto a white sleeveless shirt that proudly declares — in highly stylized, blood-red letters — Bitch.

A friend of hers arrives, an American man in his 30s. In fact, he appears to be everyone’s friend. He announces — more to the room than to his friend — “I didn’t recognize you with that hair. It looks great!” She seems glad for the compliment but unwilling to break character — let’s call it bitch lite.

Nearby stands a foil to this pair, his hair slightly messed, wearing a cardigan that looks remarkably like the one Kurt Cobain wore on Nirvana’s Unplugged concert video. Unlike the glamour crowd, he doesn’t seem to need anybody’s reassurance. Underneath his sweater is a white T-shirt with the red slashed “No Smoking” circle framing a picture of Batman. Apparently the caped crusader can also be hazardous to your health.

On with the show
As for the members of the journalism community they sock out tike well. journalists. dressed more for a day at the office than a night on the town. All armed with a photographer in tow, looking vaguely lost and confused, they — we — try to blend in, without much success. The two dogs running through the crowd look more natural, at ease in their element.

Finally, the entertainment portion of the evening begins, fashionably late. Instantly all lights and eyes are on the club’s staircase, down which Yemi A.D. and three other members of his Jad Company dance ensemble, two females and another male, descend one by one.

Typically, they work larger events. But their professionalism shows through even here, in what Yemi calls a “small, friendly affair.” When the other male model walks the wrong way around the staircase into a dead end, he doesn’t even crack a smile, doubling back stem and stoic without missing a step.

The music picks up and Yemi’s group starts dancing. The crowd loves it, responding with whistles and cheers. It’s easy to forget that the dancers are here to model the aforementioned lingerie, since what they’re wearing, while stylish, is basically club couture — not exactly what you’d expect when you hear the word lingerie.