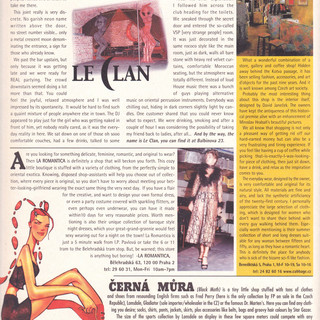 So what is this fuss all about?
I heard about this club in Vinohrady, but it's kind of mysterious because the name and the address are unknown. Since it is supposed to be a new hang-out of all those well-known random people, I asked one of them to take me there.

This joint really is very discrete. No garish neon name written above the door, no street number visible... only a metal crescent moon denominating the entrance, a sign for those who already know.

We past the bar upstairs, but only because it was getting late and we were ready for REAL partying. The crowd downstairs seemed doing a lot more than that. You could feel the joyful, relaxed atmosphere and I was well impressed by its spontaneity. It would be hard to find such a quaint mixture of people anywhere else in town.

The DJ appeared to play just for the girl who was getting naked in front of him, yet nobody really cared, as it was the everyday reality in here. We sat down on one of those oh sooo comfortable couches, had a few drinks, talked to some friends (after few drinks everybody seems to be your best friend anyway, did a little bit of dancing when my friend got up and asked me to go with him to the ladies restroom.

No offense meant, I've known him for years and I like him a lot but... no way!
After his brief explanation I followed him across the club heading for the toilets. We sneaked through the secret door and entered the so-called VSP (very strange people) room.

It was just decorated in the same rococo style like the main room, just as dark, walls all bare stone with heavy red velvet curtains, comfortable Moroccan seating, but the atmosphere was totally different. Instead of loud House music there was a bunch of guys playing alternative music on oriental percussion instruments. Everybody was chilling out, hiding in dark corners slightly light by candles.

One customer shared that you could never know what to expect. We were drinking, smoking and after a couple of hour I was considering the possibility of taking my friend back to ladies, after all... And by the way, the name is Le Clan, you can find it at Balbinova 23. 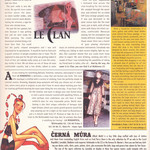