BERLIN IN THE MOON 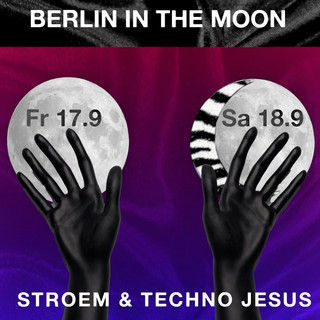 BERLIN IN THE MOON

Inspired by the berlin scene and part of the Collective
SECTION 8, play a mix between hard and melodic techno and some deep house music.

Techno Jesus is inspired by the music scene in Berlin, developing his own style of melodic techno mixed with deep and progressive house he takes his audience on an emotional journey and through many melodies and pushing beats.
You can find Techno Jesus playing in a regular bases in many of Berlins best clubs, like Sisyphos, Water Gate and KitKat.

As Frankfurt's northern light, "Stroem" exudes Nordic coolness paired with a melodic mixture of deep, progressive, techno and cosmopolitan worlds of sound that are "unheard of".
With his sets, Stroem takes the listener on an exciting journey across an undreamt-of sound universe. His unique sound makes the love for the north tangible and gives his Scandinavian roots artificial strength.
Internationally, Stroem has already celebrated considerable milestones with performances in Las Vegas, Miami, New York, London, Amsterdam, France and Spain and also nationally, Stroem holds residencies at Revolver, UP and B:East in Berlin, as well as at Neonbooth in Frankfurt and B:EAST in London. Due to his residencies and multiple appearances at events like "Sexy" and "Giant", Stroem has become a solid component of the major gay event scene in Europe.